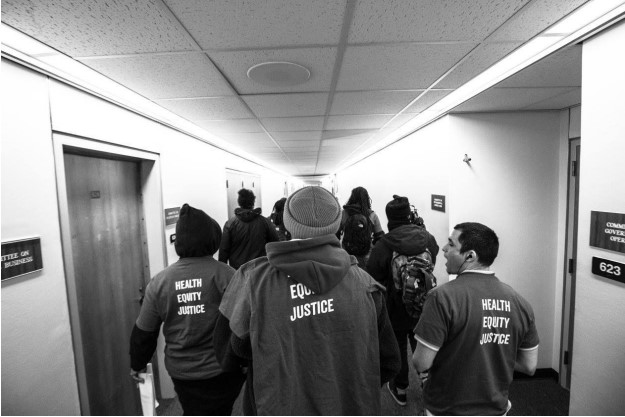 In Albany: Juneteenth for Justice, Demanding Action for #LessIsMoreNY

In Albany: Juneteenth for Justice, Demanding Action for #LessIsMoreNY 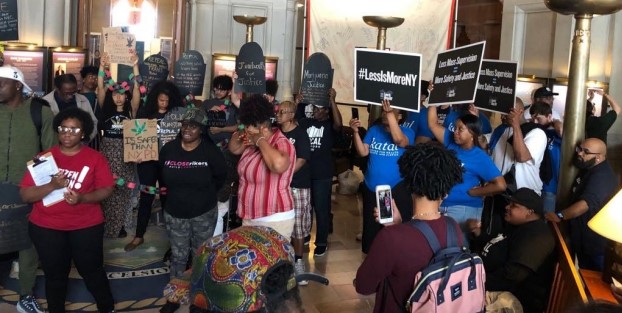 Groups including Katal, JustLeadershipUSA, Start SMART NY, and more gather in the War room at the Capitol for a rally and speakout demanding immediate action from lawmakers.

Albany has passed some notable criminal justice reforms earlier this year, but is ending session without fully completing the job. Critically important issues necessary to be addressed in order to end mass incarceration and advance the cause of justice in New York are being left undone including: parole reform (#LessIsMoreNY); solitary confinement (#HALTsolitary), Marijuana legalization (#MarijuanaJustice/ #MRTA), police accountability (#saferNYACT), and overdose prevention (#A833B / #A7246B).

In response, our members and leaders have been at the Capitol all weekalongside criminal justice reform groups demanding lawmakers and the Governor give New Yorkers the equitable criminal justice system that is well beyond overdue. 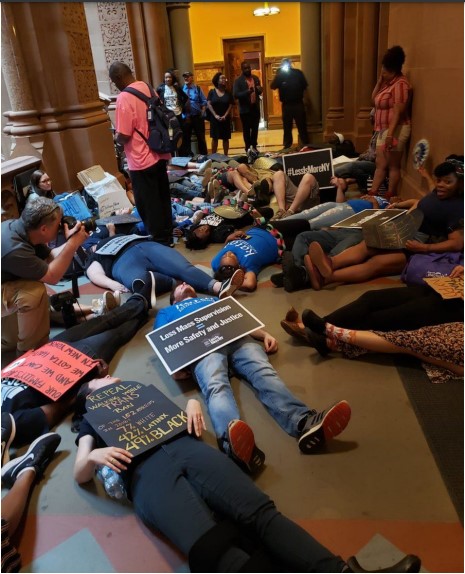 Advocates of criminal justice reforms including #LessIsMoreNY participate in a die-in in front of the Assembly Chamber, Wednesday during Juneteenth for Justice.

Yesterday, our team convened at the Capitol for a full day of action in light of Juneteenth, alongside groups including: #HALTsolitary, JustLeadershipUSA, Start SMART NY, Drug Policy Alliance, and Vocal-NY.  A historical day of remembrance, June 19th, known as Juneteenth marked the day in 1865 that Black people in Galveston, Texas learned that the Civil War had ceased, that Lincoln had signed the Emancipation Proclamation in 1863, and that they were now free. Through rallies, speakouts, and a die-in in front of the Assembly Chamber, groups highlighted the connection to reform in Albany and closing Rikers Island jail Complex, and demanded that Albany end the modern day manifestation of systemic racism known as mass incarceration. 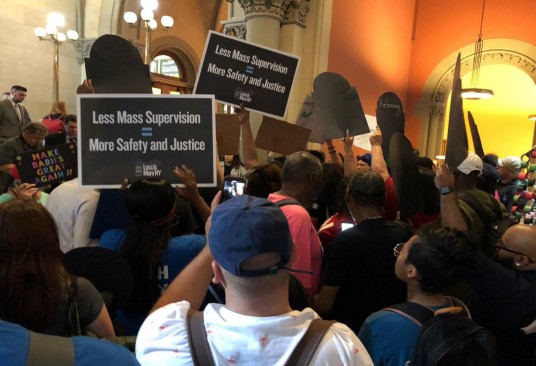 Groups including our members and leaders gather in the Assembly Chamber for a rally during Wednesday’s Juneteenth for Justice day of action.

Learn more about our #LessIsMoreNY bill and take action to demand lawmakers urgently pass this transformative legislation this session here.

Join us next Thursday, June 27 from 11am- 12pm for our Connecticut Statewide Criminal Justice Reform Call — a discussion on all that happened, and failed to happen this session.

The goals of the monthly call are to:

Register for the call here, or contact Kenyatta Thompson at kthompson@katalcenter.org, or at (860) 937-6094 for more details.

In case you missed it: be sure to watch our Healthy & Just CT Coalition’s Social Justice Advocacy Day now available to stream in full on YouTube! Watch it here, and read more about this event and how to join us for our next Coalition meeting here.

Join Us: Webinar on New York’s Application to Waive Medicaid Exclusion for People Inside

New York State is seeking approval to waive current law and use federal Medicaid dollars to finance certain health care services for incarcerated people 30 days before release. If approval is granted, New York would become the first state in the country to use Medicaid ‘inside the walls’. This represents huge opportunities to substantially improve both health and criminal justice outcomes in New York and for other states to consider and build upon New York’s model.

Please join us Wednesday, June 26, from 4-5:00pm, as our Director of Health and Harm Reduction, Keith Brown, will be participating in a discussion with the Legal Action Center on next steps in New York’s waiver application process and a strategy discussion on how national health and justice stakeholders can collectively weigh in to Turn On Carein their states.

For printing and distributing, PDF version of Katal Weekly Update.