ADVISORY: Thursday 1/26, 11:00 am, Ahead of the Mayoral State of the City address, People Impacted by Rikers, Elected Officials and Community Groups to Rally to Close Rikers

Thursday 1/26, 11:00 am, Queens Theater: Ahead of the Mayoral State of the City address, People Impacted by Rikers, Elected Officials and Community Groups to Rally to Close Rikers

With Rikers in Chaos, Mayor Adams Must Take Action to Reduce the Jail Population and Follow Through With the City’s Closure Plan

New York, NY – This Thursday, January 26, at 11 AM Mayor Eric Adams will deliver his second Mayoral State of the City address at the Queens Theater. Prior to the address, people directly impacted by Rikers, family members, and community groups will hold a rally to demand Mayor Adams cut the city’s jail population, shut down Rikers, and invest in real community safety: housing, health care, education, and jobs.

In the Mayors first year in office, 19 people have died on Rikers – surpassing 2021’s record number and the most since 2013 when the jail population was twice as large. The violence on Rikers has also escalated to record levels under this administration. The Mayor’s current approach to the crisis on Rikers is centered on sending more low-income, Black, and brown New Yorkers to Rikers, subjecting them to dangerous and life-threatening conditions. It’s despicable and will lead to more preventable deaths.

At noon tomorrow, Mayor Eric Adams will deliver his second Mayoral State of the City address. During the speech, Adams will go over his austerity budget that proposes deep cuts to crucial programs and services while continuing to excessively fund the NYPD and DOC. We reject the mayor’s budget proposal, we reject the mayor’s tired Guiliani-style approach to governance, and tomorrow Katal and other community groups from across the City will attend the Mayor’s speech to demand a just and equitable City and that Rikers be closed down once and for all.

WHAT: Close Rikers Rally at Mayor’s State of the City Address 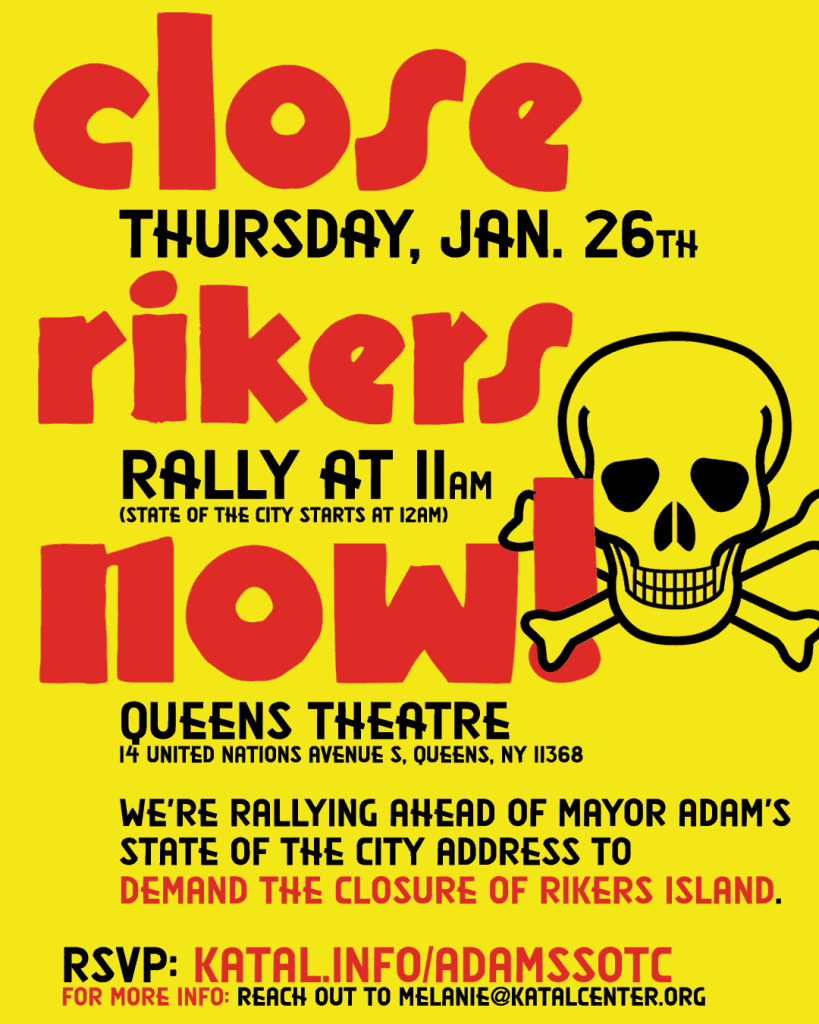