On Friday August 30th, 2019 several hundred people from all over the Capital Region joined one another in West Capitol Park to remember those we’ve lost to drug-related death, overdose, and the failed War on Drugs, and rally to demand a governmental response that meets the scope of the crisis we’re facing. The event was planned and organized by Katal, Second Chance Opportunities Inc., and the Capital Region Harm Reduction Roundtable in conjunction with other key partners. Local harm reduction, treatment, recovery, nonprofit, and advocacy groups were present to provide resources and opportunities for attendees to get involved. Albany’s harm reduction program, Project Safe Point demonstrated the use of fentanyl test strips, trained people in overdose reversal and distributed over a dozen naloxone kits.

Thanks to Truth Pharm and support from Project Safe Point, attendees were given the opportunity to decorate memorial tombstones for loved ones lost to this crisis. The stones were then placed on the green directly in front of the State Capitol, along with the large number of previously decorated stones brought by Truth Pharm, as a visual reminder of why we say, “Not one more” preventable death. The stones will stay in the Capital Region for future use.

New this year, was the availability of tours through Safe Shape, a pop-up exhibition that highlights the benefits of overdose prevention centers, also known as safer consumption spaces. Last year, Governor Cuomo promised that New York State would approve four pilot sites after the election but has not kept that promise. Similarly, advocacy efforts succeeded in the passage of a bill by the legislature that would remove the prior authorization of medications to treat addiction for people on Medicaid. That bill is awaiting Governor Cuomo’s signature without any clear reason why it has not been done to date. Several speakers highlighted these failures, and as one of the crowd’s chants went, “Cuomo lies, people die.”

Rheannon Croy of the Alliance for Positive Health and Xavier McDaniel of Conifer Park, spoke eloquently and passionately about the need for people in recovery to adopt less judgmental and stigmatizing attitudes toward people who use drugs or choose a different path or definition of recovery. Nurse Practitioner and long-time advocate of the need for medicine to take a person-centered, harm reduction approach, Samara Gabree urged people to fight for less restrictive regulations on the prescribing of life-saving medications like buprenorphine.

Also new this year was the deliberate inclusion of people with chronic and/or intractable pain as a group experiencing significant suffering and harm as a result of criminalization and opioid panic. Lelena Peacock, a national advocate on this issue came all the way from North Carolina to speak about how people who have been forcefully tapered or cut off from effective treatment using opioids have turned to unpredictable illicit markets (raising the risk of overdose) and in tragic cases have turned to suicide as a result of constant pain and suffering. Lelena told a harrowing story of a Vietnam Veteran who was in so much pain that he reached out to people for advice on how he should end his life to spare his son from the trauma of finding his father.

You cannot talk about criminalization, the overdose crisis, or mass incarceration without explicitly addressing race and structural racism. While this was mentioned by several speakers, Lauren Manning of the Albany Center for Law and Justice provided a real call to action by saying, “I am here for black folks who are always being erased. We are being left out of these conversations and we are dying too. Overdoses of black people are on the rise and it’s time to purposefully center black people when having these conversations.” Lauren then led the crowd in a chant of Black Lives Matter!” to bring the point home.

A major theme of the day was the need for a radical shift in response from criminalization and punishment, toward a health-based approach to substance use. Nearly every speaker explicitly or implicitly grounded their remarks in the demand for new approaches, and an end to the pain and suffering experienced under criminalization. Leaders from Katal and VOCAL-NY spoke about the long-lasting and severe impacts the criminal justice system has had on their lives and what a different approach could have meant to them, their families, and communities. In an impassioned speech, Alexis Pleus of Truth Pharm said that if our government doesn’t take appropriate steps, then we may “just have to do it ourselves.”

Organizers saw no better way to wrap up the rally than with a call and response reading done by longtime Capital Region advocate Ivy Morris of Whitney M. Young Jr. Health Services of this Maya Angelou poem:

On behalf of Katal and the Capital Region Harm Reduction Roundtable, thank you to our members and Leaders, the event’s speakers, the area organizations who donated their time and resources, and all the people who showed up in solidarity to grieve, speak, scream, chant, and show radical love to one another. 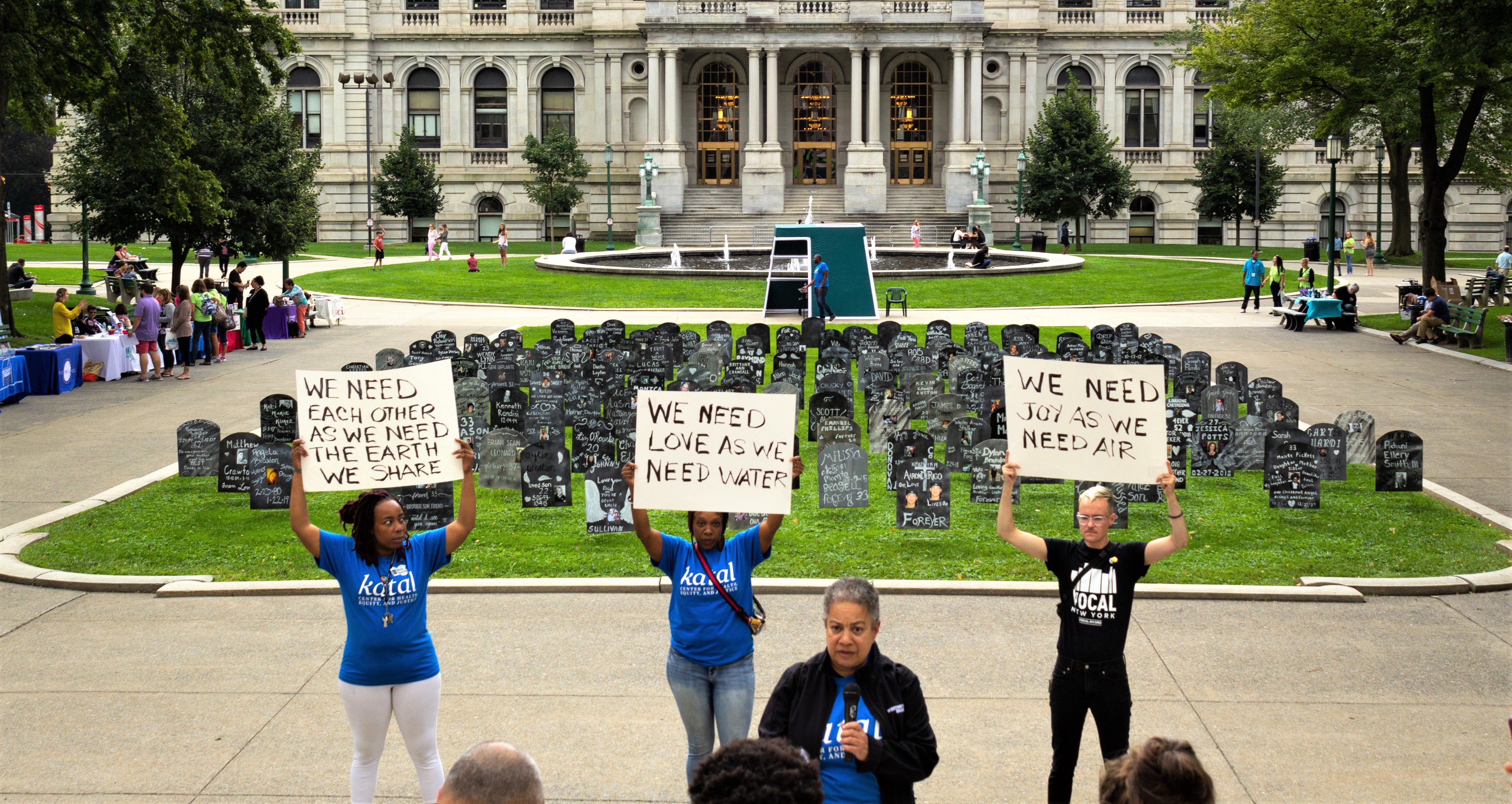 If you would like to get involved with Katal’s harm reduction work, contact Keith Brown at keith@katalcenter.org or at 518.527.6263.