CT: The Need to #CutShutINVEST

A new report issued yesterday by the Columbia Justice Lab and Lippman Commission confirms that #LessIsMoreNY will save New York State, New York City and counties in NY an astounding amount of money — nearly $700 million each year and $6.8 billion in the next ten years.

In 2019 alone, New York State spent $319 million, New York City paid $274 million, and $91 million for NY county governments. These funds, currently used to incarcerate people on minor technical parole violations, could be better spent on reentry, housing, education, healthcare, and more. Read our press release on the report, with statements from the bill sponsors and supports of #LessIsMoreNY here.

The report’s release comes in the midst of a flurry of actions by Katal and our partners in the campaign — including a series of #LessIsMoreNY Days of Action in March. 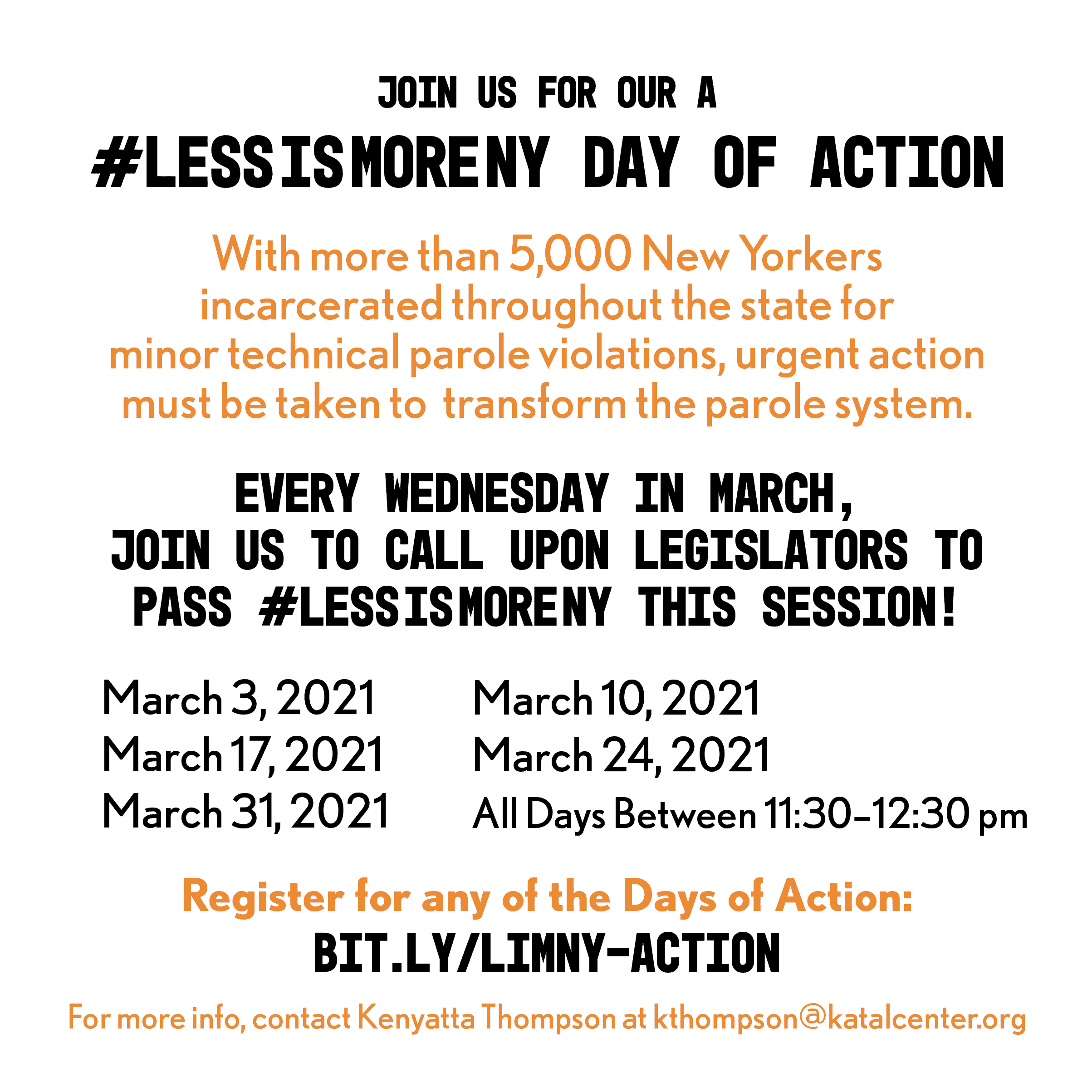 Our next #LessIsMoreNY Day of Action is next week on Wednesday, March 17th. Register in advance to join us on zoom at 11:30 am, and join us all day to send tweets to New York’s Governor as well as leaders in the Assembly and Senate to tell them to pass #LessIsMoreNY!

If you can’t join us next Wednesday at 11:30 am, take a moment to contact your New York State lawmaker using our Contact Your Legislator Tool and send a tweet for our tweetstorm with our #LessIsMoreNY Day of Action Social Media Toolkit.

CT: The Need to #CutShutINVEST

Katal was back at the CT State Legislature this week to testify (via Zoom) on a new legislation related to the closure of Northern Correctional Institution. We’ve called for the closure of Northern as part of our #CutShutINVEST campaign, as well as for investments in communities harmed by mass incarceration. The new legislation, Senate Bill 987, has a stated purpose to:

‘Reinvest money saved from the closure of Northern Correctional Institution into reentry and community-based services and programs, including, but not limited to, those concerning housing and behavioral and physical health.’

Katal member Raquel Leiva testified at the public hearing this week, in support of the bill. As part of her testimony, Ms. Leiva highlighted her husband’s experience at MacDougall-Walker correctional facility, and recounted how her husband did not receive adequate or competent medical care while incarcerated. Her remarks emphasized the need to continue to cut the prison population, shut prisons down, and invest funds into the community — to ensure that funding from decarceration and prison closures are actually invested in communities impacted by mass incarceration. Watch Raquel’s testimony on Youtube here and read more about our campaign to #CutShutINVEST.

We’re excited to announce upcoming changes to Katal’s Weekly Update. Katal launched in 2016, and we’ve been sending out this Weekly Update since 2017. It started out as a way to keep you informed of our work in our target states of Connecticut and New York. Today, we have thousands of people from Connecticut, New York, and around the country receiving these updates. With the growing number of people receiving these updates, and as we mark our five year anniversary, it’s time to make some changes!

Here’s what you can expect in the weeks ahead:

We look forward to sharing more details about the changes soon, including information on how to receive information about our work in either or both Connecticut and New York. Thanks for keeping up with our work during our first five years!

As you likely now know, Katal turns 5 this year, and we’re marking the moment with an anniversary Dialogue Series. Join us on Monday March 29th, from 5:30 – 7:30 for our first Dialogue!

By: Jordan Fenster via CT Insider The murder of 10 people at a Buffalo supermarket last week hit Marketa Edwards particularly hard. “I was born

Statement: Senate Majority and Governor Fail to Act on Kalief’s Law   STATEMENT FROM MELODY LEE, DIRECTOR OF STRATEGY & CAMPAIGNS OF THE KATAL CENTER FOR